This is part three of a five-part series detailing the most under-covered stories of 2016.

Yes, this is almost a lazy cop-out. Almost.

Everyone knows about Max Scherzer’s 20 strikeout game, Trevor Story’s monstrous seven homers in his first six games, Jake Arrieta’s no-hitter, and the legend of Gary Sanchez. But not everyone knows all of the under-the-radar achievements that happened this year. Otherwise they wouldn’t be under the radar.

Michael Fulmer had a pretty good year. He was the rookie of the year, and he’ll get a mention in a later section of this article. But one of the most impressive parts of his season went unnoticed by almost everyone. Interestingly enough, Fulmer joined elite company (Fernando Valenzuela) with his rookie achievements.

I talked about Mike Trout earlier in the series, and he’s as surefire a Hall of Famer as there is in the current MLB, but Miguel Cabrera certainly challenges him for that title. Cabrera had his 12th season with 100+ RBI this past year. RBI in general is a really bad stat for determining a player’s skill level; it’s great for telling you what the player has already done, but bad for telling you what the player will do. With that said, there’s no doubting that Cabrera is a first ballot HOFer. He joins A-Rod, Pujols, Ruth, Gehrig, Jimmie Foxx, Al Simmons, Bonds, and Manny Ramirez as the only players to ever have 12 or more seasons of 100+ RBI. As good as Cabrera is, he doesn’t get that much credit anymore. But he’s still fantastic. Keep hacking, Miggy.

Perhaps it’s because he didn’t win the Cy Young (he wasn’t even a finalist), and perhaps it’s because he’s a reliever, but Zach Britton was ridiculously good this past year. People talked about it all the time after Buck Showalter infamously left him on the bench in the Orioles’s Wild Card Game loss, but aside from that there wasn’t much chatter. It’s unfortunate, because he had one of the best seasons for a reliever ever. I’m just going to go ahead and paste what I wrote about Britton earlier in the offseason:

Britton had a 0.54 ERA this season over 67 IP. Yeah, go ahead and read that again because that’s a serious stat. He gave up seven runs all season, only four of which were earned, and had a streak of 43 straight appearances (from May 5 to August 22) where he didn’t allow a single earned run. That’s 41.1 consecutive innings. In that same time period he gave up a paltry 19 hits and 14 walks (good for a 0.800 WHIP) and added 48 Ks (10.5 K/9). The dude was literally unstoppable this season. He didn’t give up a single lead all year, and after April (I know it’s an arbitrary cutoff date) he allowed only one earned run. In five months. That’s a 0.16 ERA. But the incredible dominance doesn’t stop there.

Britton had an 80% ground ball rate, good for first among pitchers with a minimum of 60 IP in 2016. The difference between Britton’s ground ball rate and the next-highest ground ball rate (Sam Dyson, 65.9%) is greater than the difference between the second and fiftieth best (Francisco Liriano, 52.0%) ground ball rate. As I mentioned earlier in the article, ground balls result in outs about 75% of the time. Of course there’s going to be the occasional grounder that sneaks through for a single, but that means that on average, 60% of the time an opposing batter puts the ball in play, it’s a ground out. This is also very useful in inducing double plays, which Britton got four of on the entire season, although you don’t need a ton of double plays when you don’t allow many baserunners in the first place.

If you want to read more about Britton’s dominance and why he should have won Cy, click here.

In the relief dominance area, we also have Edwin Diaz. He was a rookie last season and did not get anywhere close to enough love. The fantasy community drooled over his strikeout upside and his save totals once he became the Mariners closer, but for a guy who struck out 88 of 214 batters faced this year, the general baseball community didn’t give him enough love. His K/9 was second-best all-time for a rookie: 15.33 (.06 Ks, or one strikeout, behind Craig Kimbrel‘s rookie mark of 15.39). He was very good, and expect more of him in the future. I’ll have more on relievers later in the series.

There exists a litany of other under-the-radar achievements I can list here, but I’ll only give you one more: Nolan Arenado led the league with 41 HR and 133 RBI. Not that exciting on its own, but when you combine it with the fact that he has led the NL in HR and RBI for two straight years, you get a very interesting stat: he’s the first guy since Phillies’ 3B Mike Schmidt in 1980 and 1981 to lead the NL in both categories in two straight years. Arenado is only 25 and has hit 81 HR in the past two seasons. Look for him to be an MVP contender for the next several years to come, although if the Rockies don’t start winning, the BBWAA might give him some trouble (looking at you, Jon Heyman).

#5: We’re Headed in a Peculiar Direction

Everyone hates strikeouts. By the same token, everyone loves homers. This presents a problem, because on the current path we’re on, the MLB is trending towards a league of just strikeouts and homers.

Obviously that’s a bit of an exaggeration, but let me humor you. Strikeouts in the major league are at an all-time high. In fact, we’ve been trending in that direction since 2008. 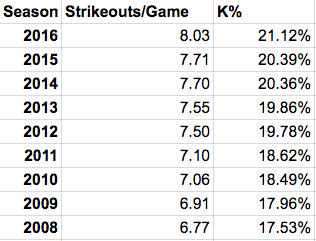 As you can see, over the past 9 seasons the number of strikeouts in the MLB has drastically increased, and each of those seasons is the record for strikeouts/game and K% (meaning that 6.77 K/GM was the record and then it was broken in 2009, again in 2010, etc.) There are two possible conclusions:

My guess is mostly the first, but some of the second. Since Major League Baseball begun tracking pitch speeds in 2002, the average MLB pitcher’s fastball velocity has increased 3.3 MPH, from 89.0 to 92.3. Slider and curveball speeds have increased each year, too. I couldn’t readily find the stats on spin rate, but my guess is that spin rate has steadily increased each year as well.

The league leader in strikeouts hasn’t changed that much, only about 50 Ks over the past 36 years, but the average player in 2016 struck out nearly two times as much as the average player in 1980. If the trend continues, we’re going to see a lot less of the 2015 KC Royals’ style of play of putting the ball in play and moving runners over small ball style, and a lot more of the 2015 Mets’ play: dingers and Ks.

Speaking of dingers, 2016 was nearly a record year for those as well. Many have speculated as to what could possibly be the underlying cause, perhaps it’s something in the water, climate change, or juiced up baseballs. Regardless of the cause, the fact of the matter is that 2016 had the second-highest homer rate of any season all-time (trailing only 2000). Yes, that includes all the seasons of the steroid era. An unprecedented 36 players hit 30 or more HR in 2016, and of those 36, eight of them were over 40 HR.

Is that a bad thing? That’s for you to decide.

Max Brill is a graduate of the University of Michigan Ross School of Business (2021). He currently works for the Chicago Cubs as a Professional Scout in the Professional Scouting department. Max has worked for the New York Mets as a Player Development Intern and the Yarmouth-Dennis Red Sox of the Cape Cod Baseball League as a beat writer. He has also contributed as an analyst for the Michigan Baseball Team and a Communications and PR intern for Michigan Athletics. Max was born and raised in the greatest city in the world, New York City, and grew up a die-hard Mets fan. He is the creator of Musings of a Baseball Addict. How to contact Max: Email: musingsofabaseballaddict@gmail.com Twitter: @maxjbrill
Loading Comments...
%d bloggers like this: