Clayton Kershaw could be inducted into the Hall of Fame in 2018 and I doubt there would be much contention. He won’t be, because he’s only 28 years old (turns 29 in March 2017), and is still pitching in the majors at an extraordinarily high level, so he won’t be eligible for induction. But if Kershaw decides tomorrow to retire and devote the rest of his life to working with his charity, he would still probably make it into the Hall of Fame. For Kershaw, though, the Hall of Fame is just a starting point. I think Kershaw can retire as the greatest (*live-ball) pitcher of all-time.

First, let me review Kershaw’s numbers through 9 seasons. In 1760 innings pitched, he’s compiled 1918 strikeouts, good for a 9.8 K/9, a 2.37 ERA (that’s first ever among live-ball pitchers with 1000+ innings pitched), and a 1.007 WHIP (first among live-ball starters). He also has a career K-BB% of 20.8%, good for 7th all-time among starters. In short, he’s already up there in terms of the ratios with the best of the best, he just needs to get his counting stats up. For example, the average HOF pitcher has 253 wins. Kershaw only has 126 in 9 seasons, which isn’t bad, but at his current pace, he probably won’t reach 300 wins. Wins are a bad stat anyway, so I don’t put much stock in his win tally, but some HOF voters might. Regardless, the counting stats will come with time, and he has a lot of time left in the bigs.

Kershaw also has no shortage of hardware. He doesn’t have a WS ring, thanks to an ERA of 4.55 in the playoffs, but he has won the Cy Young three times in the past six years and of those three Cy Young wins, he also won MVP once. Of the three years in the last six that he didn’t win Cy Young, he finished in the top five in voting. That’s saying a lot, especially considering that he only threw 149 innings in 2016. He was ridiculously good in those 149 innings, producing a 1.69 ERA and 0.725 WHIP, totaling 172 strikeouts, and allowing just 12 (!) walks in total. Yes, his BB/9 was 0.7. For reference, Max Scherzer, who won the NL Cy Young this past year, walked 12 batters in April alone. Kershaw is that good.

Admittedly, Kershaw would not be better than the average HOFer, but he wouldn’t be one of the worst ones in the hall. His ERA and WHIP speak for themselves, as does his K/9, but the counting stats simply aren’t there. That doesn’t change the fact that he is far and away the best pitcher in the game right now.

I will often be the first to say that WAR (WAR numbers referenced in this article are all according to baseball reference unless otherwise stated) is a flawed stat in many regards, but it’s a good way to get a quick estimate of how good players have been over their entire career in a large sample size. Among active pitchers, Kershaw has the second-highest WAR (52.7), trailing only CC Sabathia (57.9). However, based on Sabathia’s and Kershaw’s recent career trajectory, Kershaw should be able to pass Sabathia’s WAR total this season; he only needs 5.2 more WAR than Sabathia to do so. Becoming the active leader among pitchers in WAR is no small feat in itself, but add to that the fact that he has more WAR than (or roughly the same amount as) guys who have been in the big leagues for several seasons more than him, like Justin Verlander (50.5 WAR in 12 seasons), Zack Greinke (50.9 WAR in 13 seasons), and Felix Hernandez (51.4 WAR in 12 seasons). One or two WAR over the course of 12-13 seasons is virtually nothing, but from these numbers we can draw that 9 seasons of Kershaw are roughly equal, statistically speaking, to 12 seasons of Verlander, 13 seasons of Greinke, or 12 seasons of King Felix.

Kershaw has been the best pitcher in baseball for a few seasons, but that has not stopped him from improving. Thanks to Rich Hill, a 36-year-old journeyman pitcher who finally broke out in 2016, Kershaw has started to experiment with different arm angles. Hill is notorious for coming at hitters with all sorts of different arm angles, and Hill, after joining the Dodgers in mid-2016, has clearly influenced Kershaw. The image below is taken from a Fangraphs article (which you should absolutely check out); Kershaw’s typical release point is marked by the yellow dot. 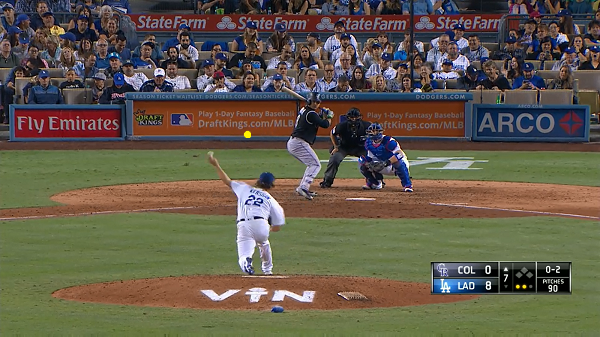 Pretty crazy, right? Kershaw is varying up his release point not by inches, but feet. He’s already the best pitcher on Earth, and he’s only getting better. And that’s going to help him immensely on his quest to become the greatest pitcher of all-time.

As it stands now, Kershaw sits 72nd all-time in terms of WAR among pitchers (according to Fangraphs). That includes all the dead-ball era players, though, and if you exclude all of the dead-ball guys, Kershaw rises up to 58th (again, according to Fangraphs). That puts him in the same neighborhood as Early Wynn, Bret Saberhagen, and Whitey Ford, and all of those guys played an entire career. If Kershaw decided to hang up his jersey today, he would end his career with 1 less fWAR or .5 less bWAR than Sandy Koufax, the player to whom he is most commonly compared. Keep in mind, though, that it took Koufax 12 years to accumulate his career WAR total, whereas Kershaw has gotten to nearly the same mark in 9.

What does Kershaw have to do between now and the end of his career to become the greatest pitcher of the live-ball era? In terms of WAR, he has a long way to go (he would need to nearly triple his current total to catch current live-ball WAR leader Roger Clemens), but if there’s anyone who I think can do it, it’s Kershaw. Kershaw profiles as the type of pitcher who ages well; he does not rely heavily on his velocity to beat hitters, instead going to his off-speed stuff and his knowledge of pitching to dispatch batters. WAR doesn’t tell the full story, though, and I think that when Kershaw’s career is finished, the Kershaw versus Clemens debate will be very heated. The Clemens supporters will point to his 24-year career which was dominant from start to finish, and Kershaw supporters will point to Kershaw’s 20-year career in which he had a more natural aging curve, and certainly did not get involved with any performance-enhancing drugs.

From a statistical standpoint, Kershaw needs to improve a bit over the next four seasons, what should be his peak years, in order to get into the conversation for best pitcher ever. I don’t foresee Kershaw having any trouble improving, especially seeing as late 20s and early 30s tends to be the peak of a pitcher’s career. Assuming he stays on the pace he’s been on through his entire career, he’ll finish with around 120 WAR (second for live-ball pitchers), 4250 Ks (that would place him fourth all-time, not just among live-ball pitchers), 275 wins, and his 2.37 ERA (which would be first in the live-ball era) should probably stay around its current mark, but I expect it to come down over the next 3-4 seasons before rising again as Kershaw ages into his mid-to-late thirties. He’ll likely retire with the best strikeout-to-walk ratio of any starter all-time, especially considering his current trend with walks (I would like to remind you that he walked only 12 of the 544 batters he faced this seasons, or 2.2%). He probably needs to add a few 300-K seasons to his resume; he only has one right now. To be fair, though, there have only been thirty 300-K seasons in the live-ball era, and Nolan Ryan has six of them.

It’s extremely difficult to project the future, especially the future of pitchers, because you never know when injury can strike, but I firmly believe that Kershaw will retire as one of the best (if not the best) pitchers to ever walk the planet. The one thing he definitely has to do is improve his playoff pitching, but I believe that his playoff performance has mostly been a result of bad luck; numbers are prone to extreme fluctuation in smaller sample sizes (Kershaw only has 89 playoff innings thrown).

Hopefully this article convinced you, but in case it didn’t I’m going to leave you with this comparison between Clayton Kershaw’s current numbers and those of other Hall of Fame pitchers. 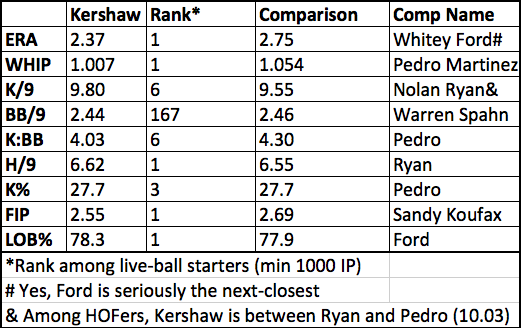 Okay, I couldn’t resist. Here are some fun facts about Kershaw:

Max Brill is a graduate of the University of Michigan Ross School of Business (2021). He currently works for the Chicago Cubs as a Professional Scout. Max has worked for the New York Mets as a Player Development Intern and the Yarmouth-Dennis Red Sox of the Cape Cod Baseball League as a beat writer. He has also contributed as an analyst for the Michigan Baseball Team and a Communications and PR intern for Michigan Athletics. Max was born and raised in the greatest city in the world, New York City, and grew up a die-hard Mets fan. He is the creator of Musings of a Baseball Addict. How to contact Max: Email: musingsofabaseballaddict@gmail.com Twitter: @maxjbrill
Loading Comments...
%d bloggers like this: