I hope this doesn’t become a series, but at the current rate, it looks like it might.

I wrote a blog entry regarding a potential change to the intentional walk rule on Tuesday, and just a day later, the commissioner of baseball and his team rolled out a new rule proposal regarding play during extra innings. For those of you who have not already heard of the travesty, the commissioner would like to essentially make teams in low-level minor league games (rookie level) start with a runner on second base in the 10th inning and every inning thereafter. This is not baseball. This is a joke. I can’t give you a litany of stats, like I usually do, to back this argument up, so this is mostly just going to be my opinions and feelings on the matter. But I hope you do not find my argument to be baseless without the vast amount of hard data I usually supply.

First, I want to address Joe Torre’s comments on the rule. Torre is now baseball’s Chief Baseball Officer, and has been one of the rule’s biggest supporters to date (though, to be fair, he may be the rule’s only supporter.) Torre, according to Yahoo Sports, said the following:

Let’s see what it looks like. It’s not fun to watch when you go through your whole pitching staff and wind up bringing a utility infielder in to pitch. As much as it’s nice to talk about being at an 18-inning game, it takes time.

It’s baseball. I’m just trying to get back to that, where this is the game that people come to watch. It doesn’t mean you’re going to score. You’re just trying to play baseball.

Let’s break this down piece-by-piece. Torre starts by saying “It’s not fun to watch when you go through your whole pitching staff and wind up bringing in a utility infielder in to pitch.”

This is one of the most fun things in baseball. Apologies to Mr. Torre, but I’m almost entirely positive that the only person (aside from him) who hates to see this, is the manager that needs to make this decision. MLB fans and writers love to tweet “Position player pitching alert!” When guys like Chris Gimenez (a catcher) or Ryan Goins (a utility infielder) take the mound. The fans with whom I have spoken about this rule hate it, and Jeff Sullivan, a prominent writer for Fangraphs, tweeted this: 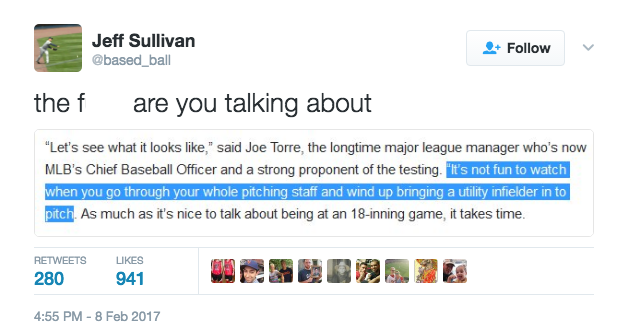 I’m sure you can fill in the blank there. Overall, the consensus on Torre’s comment regarding the fun-ness of watching position players pitch is that it’s bogus.

The next thing Torre says is, “As much as it’s nice to talk about being at an 18-inning game, it takes time.”

What an astute observation! Playing a long game of baseball takes time, who would have thunk it? I touched on this in my intentional walks column last week, but part of the beauty of baseball is that there’s no clock on it. You play until someone is leading after nine (or more) innings. You can’t dribble the ball out, you can’t take a knee, you can’t park the bus. Baseball is one of the few sports where you need to give the losing team a fair opportunity to come back and win. You have to pitch to them, regardless of how long that takes. And this brings me to the last bit of what Mr. Torre said on the new rule: “It’s baseball. I’m just trying to get back to that, where this is the game that people come to watch. It doesn’t mean you’re going to score. You’re just trying to play baseball.”

We’re not trying to “get back,” to anything. In fact, it would seem that we are straying away from the baseball that Torre wants to “get back” to. Extra inning games are fun and high-stakes. Every at bat matters more than in the first nine innings. Obviously a fan’s attention toward a game tends to go down as the game goes on, but putting a runner on second base wouldn’t be doing anything but transforming extra-inning baseball into not baseball. If the goal here is really to speed up the game, a relatively small change like this (only about one in every twenty five games resulted in extra innings) would probably have a negligible effect. If the commissioner’s office really wanted to make a big impact on the time of game, they would have to do something drastic, like change the length of a game from nine to seven innings. And, to be clear, I am in no way advocating for that, just stating that smaller-scale changes are not very likely to have a huge impact.

Back to Torre’s idea that teams will not necessarily get the runner home from second. According to the run expectancy matrix on Fangraphs, a team scores 1.068 runs on average in an inning where a hitter comes to bat with a runner on second and nobody out. Torre, in his comments, says that “it doesn’t mean you’re going to score,” but the run expectancy matrix would beg to differ.

If we’re just trying to play baseball, let the game be. Time of game is not really something that needs to be changed, and MLB isn’t losing viewers at an alarming enough rate (if at all) to change the main tenets of the game. International play already has a rule in which a player starts on second base in extra innings, but in that instance it’s understandable. A player’s main job is to play for their MLB team (or Cuban league team, etc.) and making the games end quicker in extra innings reduces the risk of injury for a player. I can’t say I like the rule in international play, but I can at least see some merit behind it. I can’t say the same for the rule Joe Torre wants to introduce.

Max Brill is a graduate of the University of Michigan Ross School of Business (2021). He currently works for the Chicago Cubs as a Developmental Scout in the Professional Scouting department. Max has worked for the New York Mets as a Player Development Intern and the Yarmouth-Dennis Red Sox of the Cape Cod Baseball League as a beat writer. He has also contributed as an analyst for the Michigan Baseball Team and a Communications and PR intern for Michigan Athletics. Max was born and raised in the greatest city in the world, New York City, and grew up a die-hard Mets fan. He is the creator of Musings of a Baseball Addict. How to contact Max: Email: musingsofabaseballaddict@gmail.com Twitter: @maxjbrill
Loading Comments...
%d bloggers like this: