All stats are up-to-date as of Tuesday, August 22.

Aaron Judge has struck out at least once in every game since the All-Star break. In the second half, he’s triple-slashing .169/.329/.355, a far cry from his .329/.448/.691 batting line from the first half of the season. Among qualified hitters in the second half, Judge has the third-worst strikeout percentage, the fourth-worst batting average, and the seventh-worst whiff rate. Despite Judge’s struggles, I still truly do not believe that the Home Run Derby Curse exists. And the numbers seem to back me up.

I want to first start by saying that this subject has been discussed many times, including here (Devan Fink, 2017), here (J.P. Breen, 2011), here (Dave Cameron, 2009), and in countless other instances as well. For the most part, those guys have come to the conclusion that the derby does not exist, though Cameron’s article notes a distinct power drop for at least one candidate that participates in the HR Derby. Regardless, it’s a popular fan theory that needs to be debunked time and time again around the middle of the season, and especially when players like Judge exhibit drop-offs as stark as he has from one half of the season to the next. Focusing solely on Judge won’t paint a fair picture, so I’ll use the last 10 years of HR Derby data to make my case (dating back to the 2008 HR Derby). I could go back further, but I think ten years is a pretty good sample size for a study like this.

All data used from here on out is taken from Fangraphs, compiled by me.

Firstly, we can’t deny that Home Run Derby participants taper off a bit in the second half, but my guess (as well as the guess of many others) is that the players who are selected for the Derby are just having unusually good first halves. Going back to the Judge example from earlier in the article, the Yankees’ RF had a first half batting average on balls in play of .426. That means 42.6% of the balls Judge put into play went for hits, as opposed to the league average of 29.9% (.299 BABIP). Judge is clearly a different animal because of how hard he regularly hits the ball, and hard hits generally go for base hits more frequently than medium or soft-hit balls, but that does not justify a BABIP which, over a full season, would be the highest BABIP in history since WWII by 18 points (Rod Carew had a .408 BABIP in 1977, and only three other hitters have BABIP’d over .400 in a full season since 1945). Judge has had one of the most meteoric fall-offs from the first half to the second half, so I won’t use him as the only case study for proving why the HRD Curse doesn’t exist. And even if I did, he wouldn’t do a very good job.

A lot of HRD Curse supporters are of the school of thought that players who participate in the HRD receive fewer plate appearances in the second half, which is not wrong, but some of that can be attributed to the second half being shorter than the first half (the first half generally spans between 88-90 games and the second half is only 72-74 games). With that said, there have only been 9 players (out of 82 HRD participants since and including 2008), who have missed a month or more of time in the second half (just over 10.9%), so the injury bug doesn’t seem to be the problem with the curse. 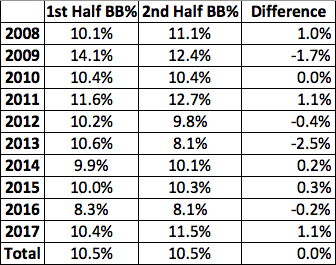 As you can see, there is virtually no difference in strikeout and walk rate (the walk rate remains literally unchanged from half to half). The OPS drops 73 points, which is significant, but an .844 OPS is still well above league average, as is a .211 ISO, which is down from a .255 ISO. The point here is that yes, the players generally do decline in performance, but most of the time, it is a direct result of the players performing extraordinarily well in the first half; Judge in 2017 is a direct example of this, as are virtually all of the other HRD participants. A .917 OPS is a ridiculous mark, so the fact that it was the average for all HRD contestants in the past ten years demonstrates the fact that players selected for the HRD are having extremely good first halves. The same can be said for HR/FB; 20% is right around double the league average HR/FB, but 16.2% is still a very good rate, and just because it is a drop off from the first half does not mean a player with a 16.2% HR/FB is not worth having.

I’m not saying that a players’ performance does not drop off in the second half after participating in the HRD, generally it does, but it is not a precipitous drop, and, as you can see from the numbers above, I would hardly say there is a “curse” for HRD participants. I’m a huge Aaron Judge fan, but to expect him to continue his obscene first half performance would be a little delusional. By the same token, attributing his regression to the mean to some phantom “curse” does not make much sense, especially considering that said curse does not even seem to exist.

Max Brill is a junior at the University of Michigan — Stephen M. Ross School of Business. Max has worked for the New York Mets as a Player Development Intern and the Yarmouth-Dennis Red Sox of the Cape Cod Baseball League as a beat writer. He is also an analyst for the Michigan Baseball Team and a Communications and PR intern for Michigan Athletics. Max was born and raised in the greatest city in the world, New York City, and is a die-hard Mets fan. He is the creator of Musings of a Baseball Addict. How to contact Max: Email: musingsofabaseballaddict@gmail.com Twitter: @metsfanmax
%d bloggers like this: