Philadelphia Phillies new skipper Gabe Kapler made his debut as a manager yesterday, March 29th, and the reviews were extremely mixed. For starters, it doesn’t help his case that the Phillies ended up blowing a 5-0 lead. But I’ll get to that in a little bit.

The controversy surrounding the Phillies’ first contest started when Kapler released his lineup for Opening Day. Here’s the lineup, courtesy of @Phillies on Twitter: 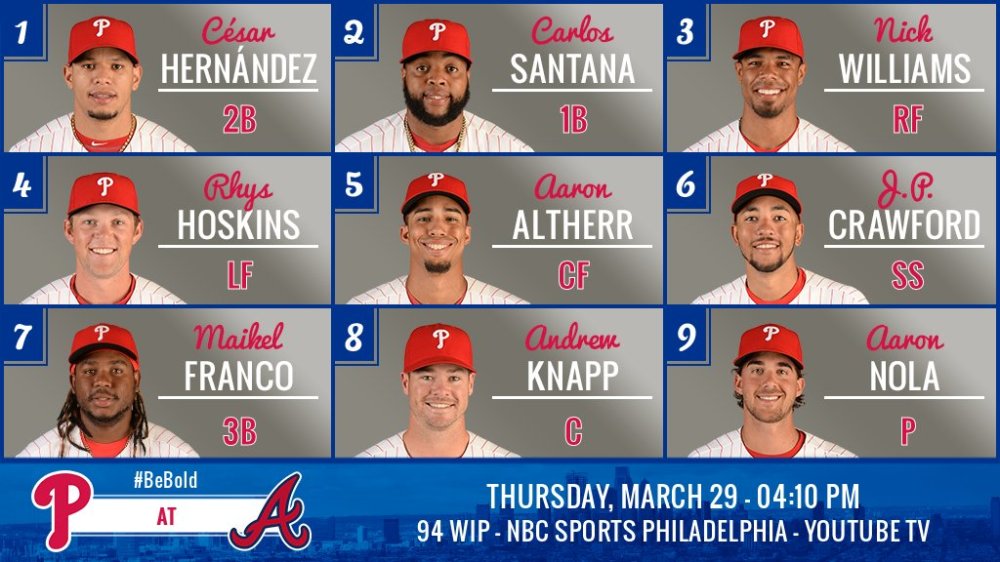 There’s one glaring omission here: Odubel Herrera. For those of you who aren’t Phillies fans, Herrera was projected to be the everyday centerfielder for this squad entering the season.

Getting the nod in Herrera’s place was Aaron Altherr whose career .244/.327/.445 triple-slash is three percent worse than Herrera’s. Yes, Altherr was better than Herrera in 2017 (120 wRC+ compared to 100), but Herrera has proven over a larger sample size that he is a better hitter and his defense is streets ahead of Altherr’s. Altherr finished with -1 outs above average in 2017, 135th in the big leagues.

Herrera as a lefty also had the platoon advantage over the Braves Opening Day starter, righty Julio Teheran. Altherr is a righty.

Said Herrera of not getting the Opening Day nod, “I don’t like the decision. But if they think there are better options, I have to respect that.”

Kapler unsurprisingly defended his decision to start Altherr over Herrera: “We thought maybe we really want Odubel running around out there when the fly-ball pitchers come, not that our other guys aren’t great, but Odubel is exceptional out there.” This is a somewhat defensible decision in that Nola is an extreme groundball pitcher, but this essentially sends the message that defense is not all that important. Herrera was the team’s best defensive outfielder last season and it’s not as though his offensive output is bad, so fans and writers were right to question Kapler’s decision here. This was just the start of things for Kapler, though.

Things went swimmingly for the first five innings of Kapler’s managerial debut. The Phillies got on the board with a run in the first and then put up a four-spot in the top of the sixth. Starting pitcher Aaron Nola was rolling with no runs on two hits, one walk, and three strikeouts through five innings. Nola led off the bottom of the sixth innings (the Braves were home) by giving up a double to opposing centerfielder Ender Inciarte, then retired the Braves two-hole hitter Ozzie Albies on a flyout to get the first out of the sixth. Nola had thrown just 68 pitches to that point and with just two more outs would have registered his first quality start of the season.

Nola didn’t get the chance to throw another pitch.

Kapler pulled Nola after 68 pitches. Nola’s final line: 5.1 innings pitched, three hits, one walk, three strikeouts. He was responsible for the run on second base when he left the game. Kapler replaced his ace with Hoby Milner, the 27-year-old lefty who threw 31.1 innings in 2017 (those have been the only MLB innings of his career so far). Milner wasn’t bad in his 31.1 innings last season; he compiled a 1.89 ERA against left-handers, holding them to a .154 batting average against.

On paper, it seemed like the right move. Freddie Freeman was the next hitter up for the Braves and historically, he has owned Nola to the tune of .375/.444/.688 with a home run and two doubles in 18 plate appearances. Despite the fact that Nola had thrown just 68 pitches and likely could have gotten through the end of the order a third time, having Milner on the mound to face Freeman was probably a better matchup on paper (Freeman was 0/5 against Milner in his career prior to his at-bat today). Notice how I keep saying “on paper”?

The more I look at this decision, the more I think Kapler fell victim to a classic case of overmanaging to which rookie managers are prone. Yes, having a lefty in to get the platoon advantage on the Braves’ best hitter was a smart idea in theory. But even if Nola did surrender a homer the Phillies would still be up by three runs with their best pitcher on the mound. The on-deck hitter, Nick Markakis, was also a lefty and has also had success against Nola (.294/.368/.647). Worst case scenario: Nola gives up back-to-back bombs. What next?

Then he would have gotten the light-hitting catcher Kurt Suzuki followed by journeyman outfielder Preston Tucker. Suzuki was 1/5 against Nola in his career entering yesterday and Tucker, who owns a career .219 BA, had never faced him. I would have liked Nola’s odds.

No matter, because Kapler made the switch. Again, on paper it was defensible; Kapler put a pitcher who has been lights-out against lefties on the mound and the results didn’t follow. But with a five-run lead and Nola at just 68 pitches, he probably could have gotten through the rest of the lineup one more time without surrendering the lead.

I know the whole deal about pitchers getting worse the third time they face a lineup but as I said before, back-to-back homers wouldn’t have ruined Nola or the Phillies. And if Nola had given up back-to-back homers, at least it would have been far more defensible to have the ace on the mound giving up homers than a 27-year-old with minimal MLB experience.

The Kapler Experience didn’t even end there.

The Phillies new skipper went on to use four more pitchers in 3.1 innings after Milner. Kapler has a nine-man bullpen and has been very vocal about going to it early and often, but maybe now he’ll be more inclined to let his ace stay out there. The Phillies ended up losing 8-5 on a walk-off homer by Nick Markakis in the bottom of the 9th. Their bullpen was responsible for seven of the eight runs.

I get that Kapler wants to revolutionize managing and that he wants to use all of the pitchers in his nine-man bullpen, but there’s no reason to carry nine relievers if they’re not going to help the team. Entering the bottom of the 6th inning (up by five runs), the Phillies had a 92% win probability according to Fangraphs. The fact that their bullpen couldn’t hold on to a five-run lead with four innings to go should have Kapler re-thinking his nine-man bullpen strategy. Other writers are defending Kapler’s decisions today, but I think that sometimes there is more to the game than just what’s on paper. Yes, having the platoon advantage is good, but having a more talented pitcher on the bump is usually better.

“I also believe in the long view we have,” Kapler said after the loss. “We had an incredible camp with an incredible amount of positive energy. I expect our club to come back tomorrow with that same degree of positive energy. This is going to be one baseball game out of 162 baseball games and I am still extremely confident that we have the pieces in that room to win a ton of them.” This quote basically amounts to “trust the process; the results will come.” I agree, but if the process is bad, the results are going to be bad. Today was a case of bad process.

Fortunately for Kapler, there are 161 games left in the season for him to prove himself. He just has to hope he keeps his job that long.

5 thoughts on “The Gabe Kapler Experience: Day One”

Max Brill is a graduate of the University of Michigan Ross School of Business (2021). He currently works for the Chicago Cubs as a Professional Scout. Max has worked for the New York Mets as a Player Development Intern and the Yarmouth-Dennis Red Sox of the Cape Cod Baseball League as a beat writer. He has also contributed as an analyst for the Michigan Baseball Team and a Communications and PR intern for Michigan Athletics. Max was born and raised in the greatest city in the world, New York City, and grew up a die-hard Mets fan. He is the creator of Musings of a Baseball Addict. How to contact Max: Email: musingsofabaseballaddict@gmail.com Twitter: @maxjbrill
Loading Comments...
%d bloggers like this: